Who Should You Play to Improve Your Chess?

Get a Better Tennis Partner 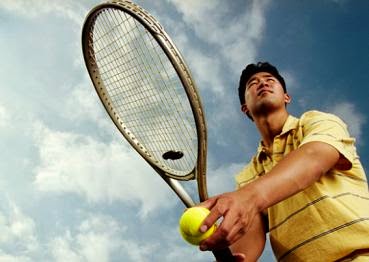 The late business philosopher and speak Jim Rohn said, "You are the average of the five people you hang around most." One of my friends used to tell me, "If you want to get better at tennis, get a better tennis partner." If you want to get better at chess, you need to play people who are better than you are. Basically, in order to get past where you are, you need to hang out with people who have better mindsets and better skills than you do. The same is true in business, tennis, and chess.

Recently, I was in a discussion on the Chess.com forums. In that forum, one of the members, a beginner, asked how to get better while showing us a game of him trouncing someone who was even more of a beginner. People made various comments, but I said that he needed to play stronger competition to expose his weaknesses. He asked, "But won't that make my rating lower?"

I answered that perhaps it might in the short run, but as he played stronger players, he would see what he was doing wrong, and do things to improve upon them. Also, he would pick up on the strategies and tactics that his stronger opponents were using on him, and then learn to use them on other people.

The Benefits of Stronger Competition


I think sometimes players get comfortable at their level. When I first started playing USCF Rated tournaments, my first published rating was 1071. The main tournaments I was playing in were G/30 Quads (a 3-round Round-Robin tournament with 4 players). I played weekly for about 3 months during the summer while I was in graduate school. I got to know the players in the 1100-1400 range.

I was on my way up, but there were guys there who were in that range for years. Now, there's nothing wrong with that if you're happy with that, of course. Who am I to judge anybody else? However, one thing I noticed was even thought their ratings were within one class of each other, they had kind of a pecking order. Joe (not his real name) was at the top, with a rating of about 1350 or so, and he kind of talked down to the other players, even though they were within 50-100 ratings points of them. He didn't talk to the stronger players either. In any case, my point is people get comfortable with where they're at. If there's no need to get better (because you're the top of your food chain), then you won't (or at least you usually won't).

And that's the first benefit of stronger competition - it gets you out of your comfort zone! For example, I used to play a lot of unsound gambits when I was lower rated. I can't blame the gambits, because some of them are played by much stronger competition, but the point was they would surprise my weaker competition and give me a false sense of confidence in my playing ability. As I started playing higher rated players, however, they would play the strongest defenses to my tricky openings and I was left wondering what to do. I ended up abandoning those openings, because I usually ended up a pawn down (my gambit pawn) with little compensation and then just getting ground down and losing a pawn down endgame or blundering.

My lesson was that I needed to learn the different aspects of chess. I had been spending all my times learning all the tactical tricks in my openings in case my opponent played fell into my traps. It's just that the stronger players didn't fall into the traps! So I had to learn proper openings. I eventually found out that I could get exciting or at least fun positions starting from at least a level position. Also, I learned to use strategy and tactics in different types of positions for a more well balanced game.

What I also found out from playing stronger competition is that often, they could give me advice about positions that were confusing to me. I would ask them what I could have played differently and better, and many of them would tell me what they would expect. Part of their generous attitude probably contributed to being stronger in the first place - they liked to analyze and talk about chess.


Hikaru Nakamura has the Right Idea


Grandmaster Hikaru Nakamura, the strongest player in the US and in the top ten in the world, has not played in the US Championship in a few years. His reason is that he only wants to play against the best competition in the world, such as World Champion Magnus Carlsen and other top players such as Levon Aronian and Former World Champ Vishy Anand. As much as US Chess Fans would love to see him play in the US Championships, I believe he is making the right move for his career.

His goal - if I understand correctly from his interviews and articles about him - is to eventually compete for the World Championship. In order to do this, he has to play those who will push him and motivate him to become the best chess player in the world. He can't "waste" his time playing against the other top US players, because they simply aren't strong enough to push him.

To use a non-chess example, I recently had knee surgery to repair a torn ACL and meniscus. I had to stay off my leg for two weeks before starting to put any weight on it. Amazingly, right before my eyes, my quadriceps and calf muscles atrophied to approximately 50% of their size. The change was quite dramatic, and being someone who was fairly active with martial arts and running, it was a little shocking. I found out the hard way that the body is very efficient at harnessing resources on what is needed most - and cutting off resources from what is not needed or being used.

For Mr. Nakamura, his chess muscles need to be pushed constantly to continue to grow or to maintain his world-class strength. Even playing other grandmasters who are not in the upper echelon would be the chess equivalent of taking weight off your leg for two weeks.

So Who Should You Play?


Of course, since chess for most of us is a hobby, we should play who we want to, and I'm not proposing that you refuse to play anybody except better players. However, if you are trying to get better at chess, on average you should strive to play those who are slightly better than you, with the occasional game against those who are not as strong as you are.

This is easy to do on chess servers such as the Internet Chess Club and Chess.com. You can set your rating parameters however you like. I usually play people up to about 50 ratings points below me and up to 200 points above me. That way, I know on average that I'll be playing people who are better than I am.


Playing stronger players will do several things for you. They will help you expose your weaknesses, which you can then work on improving. They will provide you with feedback, so you can start to think and play like the stronger players. Finally, they will push and motivate you to improve and reach their levels and higher. Do like Grandmaster Hikaru Nakamura and only play competition that will help you become better. Of course, occasionally play those who are not as strong - chess is a game to be enjoyed after all - but maintain a diet of healthy competition and see your rating rise. As always, good luck and Better Chess!
Posted by Unknown
Email ThisBlogThis!Share to TwitterShare to FacebookShare to Pinterest