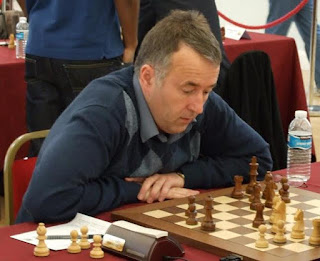 
Chess can be many things to people. To some, it is an enjoyable game for recreation. To others, it is an intense battle against someone else's ideas. To me, it is both of these things as well as something more - a tool for personal growth.

In my conversation with Grandmaster Nigel Davies, I observed that he had similar feelings about the game. I appreciated his sincere insights into chess psychology and personal development along with the practical training advice he shares.

I first "met" Nigel when I read his book The Power Chess Program when I started playing competitive chess.  Since then, I have incorporated some of his opening books into my repertoire - The Dynamic Reti and Play 1.e4 e5!. So naturally I was thrilled when he accepted my invitation to chat about chess. Besides the titles I mentioned, he has authored many other books as well as producing many training videos and products for Chessbase.

I hope you enjoy our conversation.


Development of a Grandmaster


When did you start learning chess and how did you learn?
I learned the rules from my dad when I was 9 and started out playing games with him, family friends and anyone who would give me a game at school.

What was the hardest obstacle on your way to the GM title and how did you overcome them?
The main issue I faced was in not having a good coach (and a great one would have been better) and having to rely on books and practical experience. In a way this was good because the books I read, for the most part, were by the greatest players in history. Even so I had many misconceptions and weaknesses which I only really managed to address in my late 20s and early 30s.

What were your best tournament results or favorite event you've played in?
It's generally been that my favorite tournaments coincided with my best results! But my all time favorite tournament venue was Gausdal, in the Norwegian mountains, where I made my final GM norm in 1993 and then won the event in 1997.

Do you have a game of your own that is either instructive or memorable?
My most memorable game is probably my win against Russell Dive from Wrexham 1994 in which I won the tournament half a point over the GM norm.

Here is that game. It should reward the reader with both pleasure and instructive content. Annotations and analysis by Bryan Castro.


Do you have any chess heroes or players you looked up to when you were a developing player?
Yes, though they were mainly past champions. Emanuel Lasker was the player who influenced me most and then Akiba Rubinstein, Mikhail Botvinnik, Mikhail Tal, Leonid Stein and many others.

You've authored many chess books and videos - do you have a favorite chess author or favorite book (other than your own)?
I read Lasker's Manual of Chess around 5 times so this should really count as my favorite book and Lasker as my favorite author. After that I found Mikhail Botvinnik's collected games very inspiring, Hans Kmoch's books on Rubinstein's games and Pawn Power in Chess and Raymond Keene's books on Leonid Stein and Aaron Nimzovitsch. But I got a lot out of many books by a great variety of authors, and this largely compensated me for not having a mentor.

What was it about Lasker or his play that attracted you?
It was mostly my impression of his character that I liked, he struck me as a very interesting and independent person who thought his own thoughts about both chess and life. I lived quite a solitary life in my teens and I think I saw him as the kind of Grandfather I'd have liked to have.

Do you have a particular game of Lasker's that has been inspirational or influential in your chess development?
Lasker's win against Capablanca from St. Petersburg 1914 is a game I've often returned to. Basically he had to win that game to have any chance of winning the tournament and did in majestic style. In particular the choice of opening, the apparently drawish Exchange Ruy Lopez, was a psychological masterpiece.

Here is the game between Lasker and Capablanca mentioned by Nigel. I annotated the game with analysis and comments adapted from GM Alejandro Ramirez (from his lecture about the St. Petersburg tournament) and GM Garry Kasparov from My Great Predecessors.


If you could only give one piece of advice to beginning or intermediate players, what would it be?
To study the endgame. This is the simplest and most reliable way to improve, and one that you can do well without a trainer.

I noticed your Chessbase training software How to Beat Younger Chess Players. Being in the "older" category myself, I am very interested in this topic. Can older players improve and get to higher levels and what general advice would you give?
Yes, they just need to be able to learn and change. This is sometimes very difficult for experienced players because they might have been playing in a particular way for a long time and will find it difficult to overlay their old models with new ones.

For me older players are the most interesting ones to coach because so few people think they can get better, they want to improve for the right reasons (usually their parents aren't involved!) and we can have some good banter during the lessons!

In  your work with amateur players, what is the biggest training or study mistake that they make?
They play openings that are too intricate and this drains away their study time.

Are you referring to playing sharp openings that require too much theory (for example, the Najdorf Sicilian) or “subtle” openings that are perhaps beyond the grasp of a beginner or intermediate player (or both)?
Both. Players need to build their understanding up layer by layer, mastering simpler plans and concepts first and then moving on to more complex ones. The Najdorf Sicilian is in a way fairly simple in its strategic construction (aiming at e4!) but you have to know what you're doing against White's dangerous attacking plans. And that's without the World of anti-Sicilians etc..

On the flip side, what is the one training or study method or area that amateur players should do more of?
Besides endgames, which I mentioned earlier, and regular tactics work, which everyone recommends, the understanding of typical positions and plans is something that helps a lot. But for this it's good to have a coach with a deep understanding of positional play.

I remember that you also play Correspondence Chess, which I have started to participate in more myself. What benefits does Correspondence Chess have for OTB tournament players - e.g. can over-the-board players benefit from playing correspondence chess?
It can be very useful for testing openings. The way I've used it lately is as a quick way of finding out how to play against a particular line, you just try it in a correspondence tournament in which computers are allowed. Your opponents can be very diligent in finding a refutation, you may lose but you get a free research team!

The Essence of Chess


What does chess mean to you – in other words, why do you enjoy chess?
I'm not sure I've ever 'enjoyed' chess as such, in fact there seems to be at least as much pain as pleasure. What I would say is that if you play chess with the proper 'intent' and are fully absorbed in the games, living out the drama of the fight makes you feel very 'alive'.

I think we may see chess similarly - the being fully absorbed in a particular game - for me there is a "struggle" which is both difficult and enjoyable as I am testing all of myself against all of my opponent. For you, is it a competition against an opponent or perhaps more of an internal battle to express yourself creatively and fully?
Yes I see it very much as an 'internal struggle' in which your opponent helpfully provides a series of challenges for you to overcome. As you do this it provides a powerful means of self discovery and in the end, hopefully, some measure of enlightenment!

What qualities or characteristics does chess training help people develop? Is it similar to other arts/practices such as sports, music, or martial arts?
I think that different arts cultivate different things. Chess can be very good for a lot of things but the biggest one in my view might be termed 'mind management'. Learning to play well under considerable pressure draws upon a wide range of abilities and techniques. For example the ability to maintain one's composure under pressure is something that can be developed for chess and then applied to a wide variety of situations outside the tournament hall.

Chess and other Goals


What are your current chess projects or goals - or non-chess activities?
As far as chess is concerned my main goals are coaching orientated, I like to see my students do well and one of these is my 13 year old son. Outside of chess I've been practicing qigong and tai chi in a rather serious way since 2007 and have qualified as an instructor. I'd like to improve my tai chi (especially my rendition of the long form!) and also develop my teaching practice in this field.

Are there any similarities between your practice of qigong/tai chi and chess?
The main similarity between chess and tai chi/qigong is that you have to work diligently at them over a long time as progress does not come quickly. There are useful things that I learned from chess that have made my tai chi journey easier, for example I know to practice as much as possible (for me that usually comes out at 2 hours per day) and find the best teachers that I can. This would also apply to other art forms such as music.

What are the joys and challenges of teaching your son?
It's been a long and fascinating journey, we're now more than 5 years in to our 'chess project'. The great thing is how good it has been for him from a personal development point of view, chess is very good for that. The toughest part is if he gets upset after a game, usually if he's lost from a good position. But the time we've spent training and at tournaments has been wonderful from a father-son bonding point of view.

How can readers best contact you regarding coaching or other services?
My chess coaching website can be found at tigerchess.com and for those who are local my tai chi site is at westlancstaichi.co.uk.

Nigel, I appreciate your time as you shared your thoughts about chess. I'm sure Better Chess Training readers will take a lot away from our conversation.

As we've discussed, the road to chess improvement is perhaps also a pathway to personal development and self-discovery. Do you have a parting piece of advice for players as they travel the various peaks and valleys which is chess development and life?

Yes, and that's to keep practicing with whatever you want to do well. There are no magic bullets or formulas which can substitute simple dedication.