A Chess Experiment: Time on Task 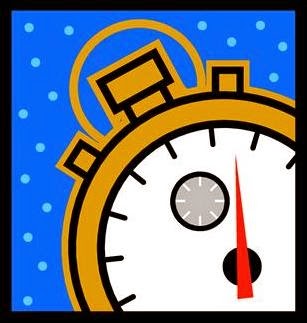 When you play a long game, what percentage of the time do you spend actually thinking about the game at hand?

If you're like many tournament players, it's probably not as much as you think. You may get up, get a drink of water, use the bathroom, watching the other games or checking out an attractive person across the playing hall. During a 4-5 hour tournament game, you may only actually think about your game perhaps 50% of the time. Well, at least that's what I observed during the 50% of the time I wasn't thinking about my games!

There is a concept well-known in education circles called time on task. In education, it's the amount of time that a student actually spends on learning! Research has shown that the more time a student engages in a learning activity, the better the student learns the material - a fairly logical conclusion. Since this concept was introduced in the 1970's it was further refined into concepts such as allocated time, engaged time, and academic learning time, but we'll keep it simple for now.

My hypothesis is that if players increase the percentage of time on task during their games, the better they will play. I have some casual data on this topic based on my observations during tournaments. Normally, playing halls during tournaments are set up with the strongest players at one end and the weaker players at the other end. If you stick around and watch what happens during a tournament round, the players on the "weak side" finish their games first and usually end up watching the top boards.
I had the opportunity to play in the same tournament as U.S. Champion Gata Kamsky. As I watched him play - yes, I was done with my game - I noticed a few things. First, he seemed very focused for most of his game. He would occasionally get up, but even then, he was looking upward slightly toward the ceiling - perhaps visualizing variations in his mind. Once or twice, he got up to get a drink or use the bathroom. He rarely did what I see many amateur players doing during these long tournament games.

Finally, I remember an old article by Canadian Grandmaster Kevin Spraggett (although the web site seems to be gone now) where he discussed increasing time on task (he didn't use the term specifically). He attributed his rise from an "average" Grandmaster to becoming one of the top players on North America - winning several of the largest Canadian and U.S. Tournaments - to reducing the amount of time he watched other games and talked to his friends during tournaments and increasing the time his butt was in his seat focusing on the game.


To help test my hypothesis, I'll be conducting a little experiment over the next couple months with my long internet games. These games would include my team league games which have time controls of 45 minutes with 45 second increment as well as my ICC Tuesday Standard Games with a time control of 60 minutes with no increment. I will record my time on task as a percentage of total playing time and record my performance.
After this experiment, which I want to have a sample size of at least 10 games, I will look at the data in several ways.
In true scientific fashion, we will see if increasing time on task actually makes a difference. In two or three months, I'll write the follow-up article to this one with the results of the experiment. At the very least, it will probably help me increase my self-awareness during my games, which is a good thing.


Do you want to help with the experiment? Post your time on task, total playing time, the rating of you and your opponent, and the result of the game. I will include your data along with mine. Please, only games with longer time controls (at least 60 0 or 45 45). Also, if you want to post your observations from doing this experiment, feel free to do so!


Time on Task: A Strategy That Accelerates Learning: A concise discussion about the topic from the Florida Education Association website with further references on the research.
Posted by Bryan
Email ThisBlogThis!Share to TwitterShare to FacebookShare to Pinterest