Interview with a Master: Jari Järvenpää 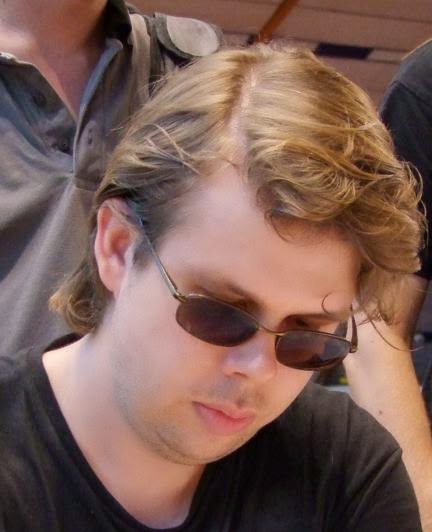 It is my absolute pleasure to present an online interview I did with Jari Järvenpää, a FIDE Master who lives in Tampere, Finland. He is an active player and chess coach on the Internet Chess Club and on Chess.com where he is also known as NFork. His current FIDE rating is 2285. He was friendly and generous with his time as he provided with some answers that I think will be greatly appreciated by those wanting to improve in chess. All of my questions and comments are in bold.

Tell us a little about yourself (age, home, profession, etc.).

I am 33 and I live in Tampere, Finland. I am at the end on my university philosophy studies. I like jogging, training at the gym and swimming. I also swim on winter time and yes, in the lake as well.

Do you find that your exercise (jogging and swimming) helps you to play chess better?

Well most of the long sport that lasts at least 1 hour should increase the stamina and help to get better results also in chess. After all the games last 4-5 hours and some tourneys may last over week.

In my case I don't swim long distances so it is mostly just enjoying the water element which is very love for Finns, because Finland is the land of thousands lakes :) And not to mention sauna! I sometimes do 1-2 hour jogging or gym workouts and they should increase the points in chess. I know many players who play very persistently and defend their bad positions very long sometimes even winning them. They may not be well-fit, but certainly if players would be then there are better chances to fight longer in chess.


When did you start learning chess?

I started playing chess when I was 10-years-old. I always lost to my big brother on start: It was good training and I was motivated to play and search for the mistakes in my games.

As you were progressing to your current chess strength, what was the most biggest obstacle for you during your chess development? How did you get past it?

I could say a couple. The first obstacle (when I was around 2100 rated, but I might have had it also before that level ) was to combine solid positional style with moderately aggressive playing style that seeks the initiative and actively uses it. There were times I played speculative attacks and luckily won many games, but also there was a phase when I didn't play enough actively. This obstacle was mainly solved with general game analysis and also with thinking about forming plans plus realizing that playing too intuitively causes many mistakes.

The second was to avoid all kinds of emotions during games, because they often cause tactical oversights. For example, a lot of players become scared of a menacing opponent piece or overexcited of an advantage. It's clear that these are partly reasons for mistakes although lack of chess understanding also has some impact. Without emotions, the mind is more sharp in chess. But you can and you should use your intuition as well. In the past, I have used some self-motivating thoughts like "this is only beginning of the game" and "Easiest thing in chess is to get the advantage, harder is to turn that into win" when I have had the upper hand but trying to avoid overexcited about it! General hints are to change my attitude before the game to fight a long game and also during the game to notice the emotions and somehow try to get rid of them - for example, by going away for a couple minutes.

I am quite focused on the 2nd obstacle because in one tourney I managed to avoid almost all emotions and I got good results. Because of that I am thinking it was not a coincidence.


Were there any "Ah-ha" moments in your chess development where you made great progress or knew you were going to become a chess master?
Generally, it's much about patterns in chess. It all started very slowly with realizing there are superficial and deeper reasons for mistakes and I knew that when I was perhaps something like 20, but I didn't work it out much. Deeper reasons often are some patterns that are to be seen. They cause lot of our losses. It's natural for people to try to forget (painful) losses, but it's ironic, because losses would offer lot of information and hints how to improve. Losing is painful and partly because of that it is easy to make up some superficial reason why a mistake or a losse happened.

I have made silly mistakes in the past and sometimes I still do, but in the past I somehow knew that some day I will overtake those obstacles that cause too many silly mistakes. Of course, I have to admit that generally my skills are much weaker compared to higher rated players and for example psychological aspects of chess doesn't explain all my mistakes.

Are there any specific training or study methods that you used as you were progressing in chess that you found very helpful?

Please try to avoid blitz and rather play at least 15 5 games and analyze them a bit. I have done that a lot in the past.


Were there any particular chess books that you found helpful when you were a younger player?

I think most important book for me was "Two chess geniuses." although I am not totally sure about it's English translation. Nevertheless it was about Alekhine and Capablanca. I think there were lot of beautiful games where players formed a plan but also followed the plan.


Do you have a favorite player that you study or emulate (from the past or present)?

I used to admire Karpov's games. He played good strategical chess and what I wrote in question 6 could also be about his games. Just recently I remembered advice of some GMs to choose strong player who plays sharp chess to emulate his style and I chose Anand. I followed some of his great games and they were inspiring! I try to examine them in future as well. The games don't have to be his new games but also old ones.

What is your best (or favorite) chess result in tournaments?

6½/9 from Heart of Finland which was played July 2011. I could rather say the result from start, 6/6, because I managed to beat many higher rated opponents. I would like to get other good results.
I asked Jari to share one of his favorite games. He was very generous to provide the following annotated game (all comments and analysis are his):

I see that you teach chess. What is your philosophy or method when you teach students?

Deep game analysis first totally without engine. This includes first writing thoughts and feelings about the processing during game and write time usage. These are the only means to gather as much information and details about your playing and then analyse the games.
Do you find that a lot of beginner/intermediate players use the chess engines too much in their analysis? Does this hurt their progress?

Yes, most of the players do! Generally there are some problems with using a lot engine:
First, the engine tells only tactical lines so it also takes some skills and understanding how to turn that into human language. What is the reason tactics are working for white or black? On human language one of the reasons could be partly based on some weak pawn, pin, etc.
Also, the engine says mostly when you lose that you made tactical mistakes and blunders here and there, but you have to find out on your own what were the more deep reasons. Weren't you enough focused on some part of the board that you should have? Were you too tired? Did you think one move was a good one, but anyway refused it due to menacing piece opponent had because you wanted to chase it away?
The idea is to analyze first on your own and also see is your thinking process good and how you choose moves.

Engines are mostly right what move is the best, it doesn't matter if engines or humans are playing, but they end up on choosing a move because of different reasons than humans.

However, it is also bad thing to think that engines evaluations don't mean anything. After own analysis it is good to check engine analysis as well, because after all it is strong player and adds more information what went wrong.

What final advice would you give to beginning and intermediate players to improve (players with ELO less than 2000)?

Focus on consequences of each move that is made on board or thought during a game and this includes avoiding a lot of intuition-based moves. Try to almost constantly question your views and habits and be open for new ideas.


Finally, what is the best way to reach you and on what online sites do you play/teach?
Feel free to find and chat with me (NFork) online on the Internet Chess Club (ICC) and Chess.com. You can e-mail me at Jari.K.Jarvenpaa(at)uta.fi (Bryan: I've taken out the "@" symbol so Jari doesn't receive robo-spam, so just replace it to e-mail him)

Thank you, Jari! I appreciate the time and thoughtfulness you took to provide such insightful answers to Better Chess Training. Chess Friends, say "Hi" to NFork next time you are on ICC or Chess.com!

Posted by Unknown
Email ThisBlogThis!Share to TwitterShare to FacebookShare to Pinterest