Improving Your Chess with Deep Work 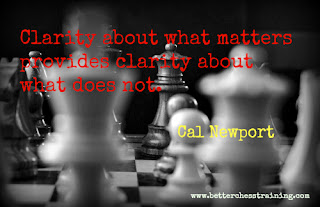 Our society is increasingly becoming one of short attention spans and distractions. Much of this has to do with the internet and the prevalence of distractions such as social media, smartphones, instant messaging, and other "tools" which can be used productively, but often are used to direct our focus and keep our brains "entertained" instead of actually helping us to be productive.

In chess - or at least in my own training - I find we have similar distractions. Between reading the tweets of chess grandmasters to playing a few dozen blitz or bullet games on the internet, I often find myself distracted from doing the very things that can actually help me improve in chess.

After a long day at work and then spending time with my wife and children, it is very tempting to watch the video recap of recent chess tournament commentary or some blitz commentary on Youtube instead of analyzing one of my recent losses.

Do you find this in your own life?

On the long flight to and from the Philippines - with a total of over 30 hours in the airplane - I had the opportunity to read an insightful book by Cal Newport called Deep Work: Rules for Focused Success in a Distracted World. In this book, Newport - a computer science professor at Georgetown University among other things - discussed the issues underlying the statements I made above.

The premise of his book is that in a world where people have less ability to focus and produce value, those who are able to should be able to thrive, as there will be less competition. The book then lays out a few rules and guidelines on how to go about developing this ability.

There were several applications to chess, which is what we will discuss in this article.

What is Deep Work

Professional activities performed in a state of distraction-free concentration that push your cognitive capabilities to their limit. These efforts create new value, improve your skill, and are hard to replicate.

Mr. Newport is mainly referring to knowledge workers who make their living producing, calculating, or doing this with information that can't easily be done by a computer. He gives examples such as producing computer code, writing books and articles, or creating art such as music or painting. I think studying and training in chess are similar.

By including "hard to replicate" in the definition, he is referring to activities that require training or education. For example, teaching someone to check answers on a multiple choice test does not require much training or skill. However, interpreting and editing mathematical proofs or long form written prose require much training, skill, and experience to do well.

Here are some chess examples of what I would consider Deep Chess Work:
The keys to these activities is actively stretching one's limits as well as doing it for an extended period of time. This type of work is arduous when you put your mind into it, and many casual players often avoid this type of work. However, those who do these things will benefit greatly.

Specifically, I have found the following benefits from increasing the depth of my chess study and training.

Noncognitively demanding, logistical-style tasks, often performed while distracted. These efforts tend to not create much new value in the world and are easy to replicate.

Now, he does go into detail in the book that not all "shallow" work is bad, and in fact some is necessary in many jobs. For example, if you are a customer service representative, your work is critical for the success of your company, but it isn't necessarily cognitively demanding and can often be done with Facebook or Twitter in the background. This isn't meant to be demeaning, but instead as an example to differentiate between deep and shallow work.

In chess, I think we also have many activities that can be defined as shallow work. Some of it, we have to do and indeed I think some of the activities can be used in conjunction with the type of deep work activities I mentioned above.

Here are some examples of "productive" shallow chess activities:
All of the activities in the above list cannot be categorized as Deep Work because they don't push your cognitive limits and do not require your unique abilities to complete. However, these activities are beneficial as they help to increase your knowledge and are often needed to help consolidate and organize the work that was done in the Deep Chess Work listed above.

Here are some examples of "non-productive" shallow chess work:
Regarding the last list, all of these activities can have some value, but they don't necessarily stretch the limits of your capabilities and are often done for entertainment and distraction rather than for improvement.

Chess is meant to be enjoyed, so I'm not telling you to avoid all the "shallows" totally. However, only you can determine whether or not your time spent in the shallows might be better allocated - at least partially - towards Deep Chess Work.


I'm like many of you. I have a full time career, children, and other responsibilities. So being able to piece together a couple hours here and there to train and study is often difficult. However, I believe that increasing the amount of deep chess work in your training will yield great dividends over time.

Here are a few suggestions to get you started:


Deep Work: Rules for Focused Success in a Distracted World by Cal Newport. This book is very interesting and a fairly quick read. I highly recommend it.

Interview with Cal Newport on the Psychology Podcast. An interesting discussion that compares Deep Work to concepts like deliberate practice and flow.


Let's face it, chess is getting faster and our attention spans are getting shorter. The volume of chess videos (which can be beneficial) and blitz and bullet chess (which can also have some value) have overshadowed deep work. This is exacerbated (at least for adult chess players) by responsibilities of work and family which prevent us both logistically and in terms of energy to pursue hard deep chess work.

However, if we can create a few habits and seek out opportunities to increase the moments of deep chess work, I believe our skill and knowledge will benefit greatly.


What type of deep chess activities do you enjoy? Share it in the comments!