Agreeing to draws in the middlegame, equal or otherwise, deprives you of the opportunity to practice playing endgames, and the endgame is probably where you need the most practice. ~  Pal Benko

Lately, I've been very interested in getting better at the endgame. This is for several reasons. First, I'm getting older and perhaps a little wiser, but it could just be that my memory is getting worse and it's easier to remember positions with less pieces on the board. Secondly, my children are starting to play and it's the easiest place to start to teach them. Finally, many of the masters whose games I admire - Capablanca, Smyslov, Rubinstein, and Karpov - were absolute masters of the endgame.

In the past, I've recommended several good books to get you started on the endgame, including Jeremy Silman's Complete Endgame Course and Jesus de la Villa's 100 Endgames You Must Know. I would add to this Nigel Davies' Tiger Chess Program if you enjoy watching chess videos and a systematic study program.

In this article, I just want to highlight a couple other resources that I use in my endgame study and practice.

This is actually a site for computer programming, but it has a very useful page for 6-man endgame tablebases. You can copy your FEN positions and paste them and then the site tells you whether it is a win, loss, or draw for every single possible move.

I recommend you use this in conjunction for learning specific endgame methods, for example, specific rook and pawn endgames like the Lucena or Philidor Positions.

It is important to know the concepts and methods first before you use this tool. This is similar to using computer chess engines to analyze your chess. If you do not have a clue about the underlying ideas behind the moves, it will do more harm than good.

The way I use it is when I'm practicing endgame positions against the computer or a friend. If I get stuck on the winning method, I might first go back to the book or video where I learned it, but then I'll plug the specific position into the tablebases and see what the best moves are.

I don't want to be redundant but I want to make one last emphasis that this is a tool to supplement actually learning how to play specific positions.

Chessvideos.tv has a simple endgame simulator that includes a few theoretical endgame positions including king and pawn, rook endgames, and famous endgames. The positions are loaded and you play against a chess engine.

The interface is very simple and there's no way to save the moves or interact with them any other way. However, I look at this site as a way you can reinforce your technique in these simple endgames. This is something I often set up in SCID to play against the chess engine.

The nice thing about doing them on this site though is that it will automatically set up the pieces randomly (within the parameters of the specific endgame of course), so you can practice your technique efficiently.

This is a nice little tool that I use occasionally when I'm relaxing and just want to play through some rook and pawn endgame positions. Again, it's important to learn the technique from a book or video first. 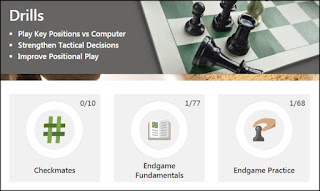 Chess.com has a lot of great resources and is a great place to play chess. In the last year or so, they've added a lot of new learning resources including their Endgame Fundamentals and Endgame Practice drills.

These are similar to setting up positions on SCID and playing against the engine, but these positions are specifically chosen as a progression from simple to more complex.

The nice thing that seperates this chess.com drills from "doing it yourself" is that the computer engine gives you helpful feedback on the quality of your moves (other than the numerical evaluation) as well as the ability to analyze and download the pgn notation of your drill.

Access to the first few drills in each section is free, and access to the rest can be purchased through monthly or annual subscription.

This isn't really an endgame resource, but instead a platform in which you can practice your endgames. Using positions I gather from the books mentioned above or from the downloadable pgn's provided through Tiger Chess, I set up the positions that are best learned through practice (such as the Philidor Position and its variations) as opposed to just memorization.

I've written about SCID before, and I use it for a lot of my chess study and game storage. I have created a special endgame database with all of my practice positions, and I'll go over them and practice against the engine.

I want to conclude the article with a pleasant endgame breakthrough I made. I recently studied king, bishop, and two pawns versus bishop (of the same color) and king in Tiger Chess. I was having the hardest time trying to figure out.

I was making simple mistakes such as the following:

However, after using some of the tools mentioned above, I was able to figure it out. I re-watched the videos in Tiger Chess, then analyzed my attempts using the Nalimov Tablebases, and final practiced it several times with SCID. Here is the latest, with the strong chess engine Stockfish 7 as my opponent.


I hope you found some of these resources helpful for your endgame training. Like many parts of chess, continued practice will help increase your understanding. This is especially important in endgames because your knowledge and understanding of certain endgame positions will help you with move selection and evaluations in the middlegame (and even the opening). Also, during tournaments, you may be running low on time and your knowledge of a winning method may be the difference between a win and a loss.

Are there any other endgame training resources I didn't mention that you use?

Which of the resources I mention will you try this week?

Do you like the endgame? Or is it a "necessary evil?"
Posted by Bryan
Email ThisBlogThis!Share to TwitterShare to FacebookShare to Pinterest