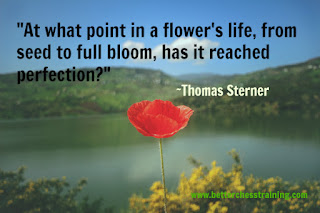 Years ago, I was helping a young player I had met on the internet with his chess. We had informal lessons, and we would go over master games together. This relationship continued for about three months, and we met weekly.

I started to make an odd observation - my young friend never played any rated games. However, every week, he would ask me some version of the question, "What strength do you think I am?"

My answer was the same: "Play some rated games and find out."

He kept complaining about not "being ready." Despite my encouragement, he never made the leap. We stopped meeting together, due to some mutual changes in our schedule. A couple months later, he wrote to me. I no longer have the original message, but here was the paraphrased message:


Thank you for our time together. I really appreciate it. I have started taking lessons with a grandmaster, who has been very helpful. Although I do not feel I am ready to play rated games, he assures me that I am a 'Class B' player. That would make me as strong as you! I hope you are doing well, etc. etc.

Well, I was happy for my friend (whom I will refer to as Joe for the rest of the article) and I wished him well, but I looked him up on the chess server and again noticed that he had not played any rated games!

What is the point of me telling you this story? Well, there are a few lessons here which I will share.


Ratings are important...and not important. Ratings are a measure of performance. However, in and of themselves, they only tell us so much. There are general conclusions we might be able to conclude. For example, the training needs of someone rated USCF 2000 are a lot different than someone rated USCF 1000. However, in between there is a lot of variance with regard to the needs of players.

When Joe asked me what I thought his rating was, I think he was looking for validation. The problem is that unless you actually play rated games, you cannot judge a person's ratings, because of performance factors.

For example, he might have master level knowledge of openings, middlegame, and endgame, but if he gets really nervous or impulsive during actual competition, his performance might be a lot lower than his knowledge level.

Ratings are descriptive in nature. They are a result of good results that are a manifestation of your knowledge and skills in the opening, middlegame, and endgame as well as performance areas such as attention, endurance, composure, and clock management. Ultimately, your rating should follow your overall strength.

However, your rating is not prescriptive in nature. Your rating does not tell me about what your needs are to improve. Two players may have the exact same ratings, but may have very different strengths and weaknesses. Here are just a few areas where the players may have differing levels even with the same rating:


The point is that worrying about your rating doesn't have much of a practical purpose. However, it may have a psychological purpose to players - as I believe was the case with Joe.

Being Honest with Yourself

I recently had an unpleasant experience at a recent tournament. I had won in the first three rounds of the tournament and was tied for first place going into the final two rounds. However, I lost the last two games and finished 11th out of 56. This is not a bad result, but I was very disappointed in myself. Why? Because I was the highest rated player in my section and the first seed in the tournament and I expected to win.

After a day or so, I was able to distance myself emotionally from the result and about to look at my games and my performance. I found the following areas that need additional improvement - at least relative to my other skills:
There were a few areas of strength as well!
Here is the point. I couldn't have discovered these things about my game if I didn't play in the tournament. The "payment" for these insights was the emotional roller coaster of victory and defeat. Your chess strength can't exist in a vacuum. There is no such thing as a "closet Grandmaster."

"At what point in a flower's life, from seed to full bloom, has it reached perfection?"

So what is the solution? I think it's the nonjudgmental acceptance of where you are. Realize that you have strengths and weaknesses in your chess. Fortunately, for the most part you can improve your weaknesses!

The mistake that Joe made and one I have made (and probably will make) is the desire for validation from other people. He didn't get it from me, so he found a grandmaster who was able to give it to him.

Why? We need to be honest about our needs before we will seek out the knowledge and improve it. I remember taking a chess lesson about 15 years ago and my instructor telling me that the books I was studying were too advanced for me. I was offended, and my refusal to seek out appropriate material probably hindered my development. Fortunately, I have gotten over that weakness but many people do not.

Remember that you are perfect where you are. The only validation you need is that which you give yourself. Accept your strengths and your areas that need improvement. Don't worry about your ratings, and don't fear playing rated games against strong players.

Do these things and continue your study and training of our beautiful game, and you'll find yourself on the path to better chess.

Do you ever worry about your ratings?

Have you ever had a "blind spot" that hindered you from taking the steps you needed to improve?


Posted by Bryan
Email ThisBlogThis!Share to TwitterShare to FacebookShare to Pinterest