How to Learn Openings as a Beginner

I have had the opportunity to teach children and adults how to play chess. It has been a joy to do so, and I have often been asked how to go about learning openings. During my classes, I often don't have time to go into detail, and often go into the commonly known general principles:
However, to someone who has just learned chess this is hard to conceptualize. Searching on the internet I have found some decent resources but they either are too general, repeating these same general principles, or too specific and thus too advanced for beginning players.

So hopefully with this guide I will try to find a good middle ground so that if you've just learned how to play chess, you can find a way to navigate the opening moves of a chess game.

I hope to do this by first giving a little more information about the general principles. Then I will actually show you some examples and show you how these principles are executed by good players. Finally I will give you some practical advice about how you can learn more as well as some resources such as books and videos you may find helpful.

The Principles of Opening Play

It is important to note that the principles are just a guideline. Sometimes you may have to break one of the principles for a specific reason. It is beyond the scope of this guide to go into too many of the exceptions but just remember this as you learn more about chess and run into an "exception to the rule."

Controlling the center in the opening is very important. There are a couple reasons for this:
What is the center?
Generally, the center are the squares d4, e4, d5, and e5. As seen here: 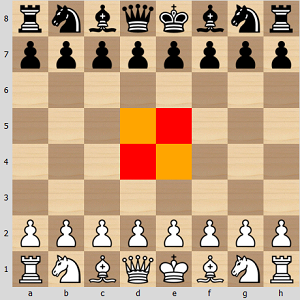 In practice, when both sides are fighting for the center, they will often concede some of these squares to the other in order to plan specific strategies around them. These involve lines of attack, key squares for a piece, as well as well-timed pawn breaks. I'll write more about these things at another time. In general though, against good competition, it is difficult to have full control of the center, but you want your fair share of it.

Besides controlling the center, your opening moves should also get your army mobilized. Usually, the pieces are developed in the following order (but again do not feel you have to stick to this if your specific game situation calls for other moves):
We will look at a few examples after we discuss our next principle.

Principle #3: Get your king to safety

Because the object of the game is to checkmate your opponent's king, king safety is essential. usually this is done by castling either kingside (the short way) or queenside (castling long). Modern chess theory - moves that have been tested and refined by chess master throughout the history of chess - sometimes has exceptions where it is best not to castle the king, but a majority of the major opening systems and lines of play involve castling. The reasons that castling makes the king safer include the following:

The Principles in Action

Here I just want to show you how these principles play out using some popular openings. One thing to note is that at this stage, I encourage you not to try to memorize the moves, but instead try to understand the purposes behind them. As you continue your research and progress in chess, you will start to learn and commit to memory the moves you want to play.

Here is an example from a popular opening. As you continue your chess study, you will find the rich history of specific opening lines. This particular line has been played since the mid 19th century and still played by masters today!

In our first example, we looked at an opening initiated with the King's pawn (1.e4). This next example is a popular opening starting with the queen's pawn. I think beginners should start with one of these moves with White. There are other good moves and we'll go over those as well in future articles, but for a long time, these two moves were considered the strongest for White and the strongest players in the world still use them regularly.

For more examples of these principles in action, Chess Grandmaster Alejandro Ramirez goes into a little more depth with these basic principles and how the openings developed around the basic concepts such as the center and development.


These are just a few examples for solid opening moves for White and Black to give you an idea how to apply the general principles. We will have other opening systems in future articles, and there is a lot of information in books and on the internet. This will give you a good start.

Now that you know the general principles and have seen a couple examples of how chess masters throughout history have applied them, here are some next steps you can take to improve your opening play.

The opening is an important phase of the game. Learning how to start your games properly will allow you to get a healthy position where you can launch attacks or defend effectively. Chess openings have a rich history and can provide aesthetic pleasure also. Come back often to learn about more common openings as well as other aspects of chess. Good luck!

What are your opening questions? Are there moves you don't understand? Let me know and maybe I'll create an article to answer your questions.