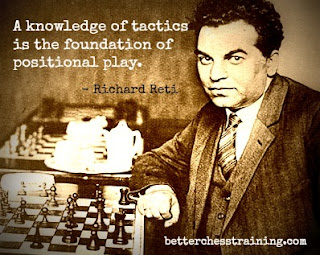 A knowledge of tactics is the foundation of positional play. - Richard Reti

Tactics are important for chess players of all levels. The simplest tactics, such as pins, forks, and discovered attacks, start the journey for the beginner to move into more advanced levels of chess.

Today's article will be about an important tactical theme - the in-between move (also known as zwischenzug). An in-between move is a move that is unexpected as usually the preceding move is a typically forcing move, such as a capture or threat to another piece.

Here's an example from a game of the 3rd World Champion, Jose Raul Capablanca.

The reason this concept is so important is that it's often missed during calculation by players of all levels. Learning to consider these during your games both for your moves and for your opponent's moves will strengthen your ability to evaluate moves and find hidden resources in all positions.

For example, had I seen the in-between move (this is a blitz game so I'll forgive myself), I would have won the following game.

So now that you have an idea of what in-between moves are, how do you spot them in your games? Here are a couple tips: 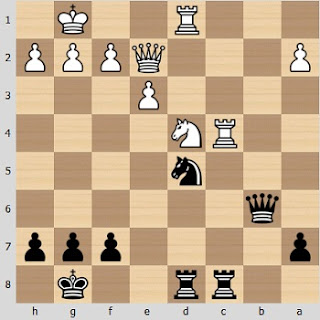 The solution to this problem requires recognizing that Black's in-between move involves a check.

This problem is a little more difficult and involves several tactical themes, but the in-between moves before recapturing in the main line need to be seen to solve it properly.

Zwischenzug - the in-between move - is an important concept to understand as well as spot in your games.

Also, one of my previous articles features an in-between move example on the Better Chess Training Youtube Channel.

Besides the advice and examples given above, I encourage you to practice your tactics on a site like Chess Tempo where you can find problems like these and many more. Also, I wrote a general article about improving your tactics that includes a tutorial video for Chess Tempo.

I hope you enjoyed this article. Please share it with other chess players you know and feel free to leave comments. Good luck and good chess!
Posted by Bryan
Email ThisBlogThis!Share to TwitterShare to FacebookShare to Pinterest